According to the WHO, about 1 98м7 300 000 people suffer from anemia. Anemia (Ancient Greek: ἀναιμία anaimia, meaning "lack of blood", from ἀν- an-, "not" and αἷμα haima, "blood" ) is a pathological condition characterized by decrease in the total amount of red blood cells (RBCs) or hemoglobin in the blood. As a result, a lowered ability of the blood to carry oxygen into the tissues and hypoxia occurs, i.e.  oxygen starvation of tissues.

Hemoglobin (Hb) is a special protein found inside red blood cells.  The main and unique feature of this protein is that it easily combines and easily releases blood gases: it combined with oxygen in the lungs, delivered this oxygen to tissues, loaded them with carbon dioxide, delivered carbon dioxide into the lungs, released, again combined with oxygen and etc.  Hemoglobin contains a special non-protein component - heme, which contains iron, without which oxygen transfer is impossible. 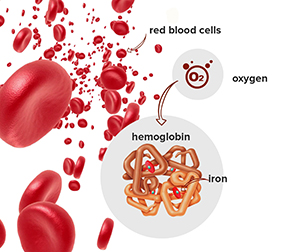 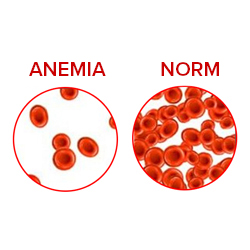 WHAT IS THE DANGER OF ANEMIA?

With a prolonged decrease in hemoglobin, the load on the heart, lungs, liver, kidneys and other organs increases, metabolism is disturbed, toxins accumulate, sclerotic and cicatricial processes develop in various organs.

Against the background of prolonged moderate and severe anemia, the following may develop: Heart failure; Hypoxic coma; Respiratory failure; Diseases of the kidneys and liver; Decreased immunity. Anemia leads to a complicated course of existing chronic diseases of the heart and lungs (bronchial asthma, ischemic heart disease, cerebral ischemia) and can cause the development of such dangerous complications as myocardial infarction, stroke. 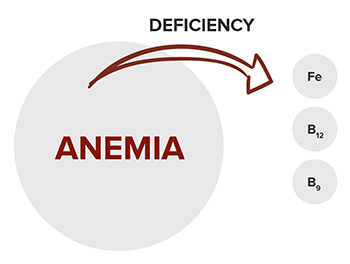 According to WHO, iron deficiency is observed in 3,580,000,000 people Iron deficiency provokes anemia in 90% of cases. IRON DEFICIENCY ANEMIA (IDA)