If the body has a decrease in the amount of hemoglobin or red blood cells transporting oxygen, serious problems arise with the delivery of oxygen to organs and tissues.  Without oxygen, it is impossible to generate energy from food components.  Therefore, people with anemia develop different symptoms, apparency of which depends on the severity.

In practice, there are 3 stages of iron deficiency with the corresponding signs:
Prelate stage - insufficient iron content in the tissues, while the concentration of serum iron and hemoglobin is normal.  Here, the lack of iron in the body is expressed by persistent malaise, weakness.  At low loads, tachycardia appears.  Persistent irritability develops, a tendency to depression, dizziness, excruciating pains all over the head appear.  It becomes difficult to swallow food, the tongue ulcerates with furrows with areas of redness.  Taste preferences change - one likes gasoline smell, wants to eat chalk.  Hair begins to split and fall out; brittle and crumbling nails appear.

Latent stage - reduced concentration of serum iron, hemoglobin level is normal.  With the progression of iron deficiency, the skin turns pale and dries, it has a bluish tint.  Cracks in the corners of the mouth, pain throughout the abdomen are constantly tormented.  Blood pressure decreases, body temperature drops. 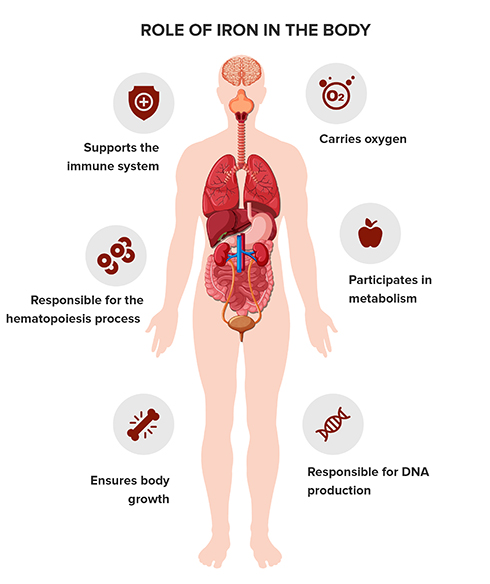 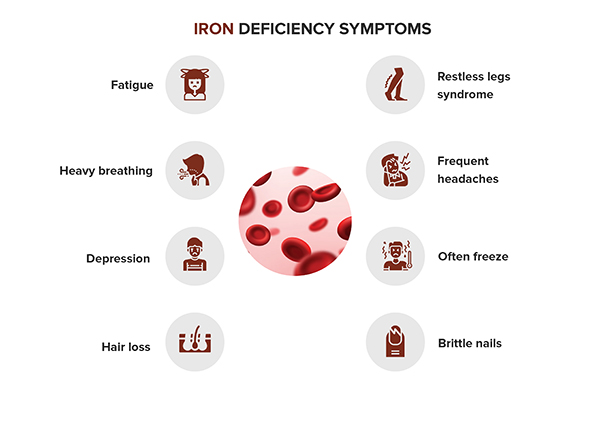 Stage of apparent deficiency - reduced hemoglobin, the number of erythrocytes and other indicators of red blood.  It is accompanied by a decrease in immunity, frequent colds, infectious diseases, and indigestion. Lack of iron in the body in women at this stage is manifested by more pronounced symptoms.  The hormonal background is changing, which increases the possibility of developing tumors on the internal organs.  The deformation of the nails is special - they become a concave spoon-like shape; their growth slows down.  Drowsiness, shortness of breath, pain in the heart appear.  With further progress, the disease becomes life-threatening.